What is depression and how do we work with energy to transform it?
In this powerful story of transforming depression through the power of energy medicine, Lou interviews one of the Council of Elders, Kaz Clarke, who shares with you: 1. What happened 2. What it was like before energy medicine 3. What is it like now? This is an excerpt from the book ‘The Power of Energy Medicine.’

Lou: Kaz I would love for you to share about the experience when Phoebe was born?

Kaz: In September 2011, I started a blog to write about and share my art on the Internet. My passion for drawing had finally been reignited, but my confidence and belief in myself as an artist was non-existent, due to years of depression and anxiety. The thought of showing anyone my art was terrifying and not something I did willingly. Through blogging, I had found, ‘Illustration Friday’, an online platform for artists all over the world to connect with each other and share their work. They announced a prompt word once a week and invited artists to do an illustration about the word and post it on their site, each Friday. The artists would comment on each other’s work, which was very encouraging. The winning illustration for the week would then be featured.  One week they announced ‘scary’ as the prompt word.

My immediate thoughts were about how scary it felt to share my art with the world!

To me it felt like leaping off a cliff into the universe, naked, with only my art to cover my vulnerability. I decided to do a sketch about exactly that. I sat at my drawing table and started to draw… Being very critical of my entire self at the time (obviously through years of depression) I drew a long, lanky figure with long hair, a huge nose and no mouth. It was a simplistic representation of what I thought other people thought of me. The hair was blonde because I often joked about being blonde on the inside. Apologies to all the natural blondes, including my beautiful daughter.

This brave figure was leaping off the edge of a cliff into the abyss with only her artwork to cover her nakedness. I was so excited and couldn’t wait to finish and post it onto my blog AND Illustration Friday! I knew this character was special but had no idea at the time just how she would soon change my life. She was later named Phoebe, as my friends often joked about how much I reminded them of the character, Phoebe from the TV show, ‘Friends’. On Tuesday the 1st of November 2011, I posted on Illustration Friday for the first time with my artwork of Phoebe that I had created for the prompt word ‘leap’. Being the first Phoebe illustration I had ever done, it was also her debut with the entire world.

It was both exciting and terrifying and literally a huge leap forward for me.

Phoebe was to appear on that site many more times over the following years. At the time, the date of her (and my) debut had no significance but now as I look back, it was actually 1.11.11, a very significant sequence of numbers that was to mark the start of my journey back to my true self. Spiritually, it meant ‘a new beginning, an awakening’. I had no idea of this at the time! This is the description I wrote on my blog about the illustration:

Scary is… throwing yourself into cyberspace, naked, with only your artwork exposed (at least that’s how it feels), in an attempt to put your artwork out there. I just recently started this blog to do just that… really scary. This is my first ever Illustration Friday, exciting, but still scary.

Lou: Kaz what was life like physically, emotionally, mentally, and spiritually?

Kaz: Physically I was on the go, juggling being a full-time mother of two busy school age girls, with working from home as a Graphic Designer and being a wife. My priorities were exactly in that order. On top of that I was always available to help out with any fundraising at their school. I did all the housework, shopping and most of the meals. My husband at the time, cooked dinner occasionally. Gardening was also my job, except for the mowing which was done by my husband (we lived on acreage, so this was a huge job).

Life was very busy and there was little time left for myself.

Being busy was like a coping mechanism for me. The more distraction, the less time I had to stop and think.   I drove myself through each day. It was only when I was on my own that I would be faced with what was going on inside. That’s when I would journal to try and make sense of the chaos inside. Emotionally, I was disconnected.  I knew that I was incredibly unhappy, but the truth of why exactly had been smothered by depression.

I had lost touch with my heart somewhere along the line and every now and then, it would ache, as if trying to reach out to me. I lived in survival mode. My head kept telling me that I had made my bed and so therefore had to sleep in it. It was all too hard. Occasionally, my non-existent emotions, would get the better of me.

I would break down in uncontrollable tears, unable to keep it in anymore.

I would end up, driving over to my mother’s place to collapse into her arms. I would cry and talk all day, tissue box in hand, and she would patiently listen, until finally the tears had stopped and I was able to go back home and do it all over again. Even on those days, I knew I had no choice but to go back. I could never have left my kids. Mentally, I was a mess. I don’t know how I kept it together. Sometimes I didn’t.

My mind was like an entangled mess of spaghetti, lost in fog. Most of the time, I couldn’t think straight. Depression came in waves and bouts. Anxiety kept me on the edge. My husband, at the time, had no idea how to deal with my mental state. He tried, but every time I fell into depression, I would drift further away and the distance between us grew more and more, as time went on.

There were a lot of bad days, where I existed entirely on auto pilot.

I had learned over the years, how to keep going and to wear a mask around other people, so everything seemed rosy from the outside. It wasn’t until I was home or driving in my car, that I took my mask off and allowed my mind to wander, further than the day to day grind. That was always a risk, because if I wandered too close to the truth, I would start to spiral out of control in a downward direction. It was much easier to cope, by pretending that I was happy with my life.

Spiritually, I didn’t feel whole. Searching for something, a connection, answers, help. I had started going to church. It really did help at the time, but after a while I started to question the confines of the religion itself. It wasn’t a perfect fit. I believed in God and prayed every night before I went to sleep. At times it felt like praying was all I had. God was the only one I could ask for help, and the only one who knew the truth, no matter what I said or asked for.

Looking back, I can see that all those prayers were in time answered.

Which has strengthened my faith in God and The Universe. My faith kept my spirit strong enough to keep going, even in the darkest times. Hope got me through to the next day. These days, I am much more in tune with my spirituality and my intuition. I constantly see signs and synchronicities, especially repeating numbers, and thank The Universe for each one. I never feel alone, even when I’m on my own, and I’m constantly guided by my ever present spirit guides.

I love my space, freedom and the simplicity of my life now. I don’t know how I survived back then, or found my way back. It was by no means an easy or straight forward journey, but I definitely believe my spirit was led and guided out of the darkness and into the light. I’m so grateful for a second chance at living.

Lou: Kaz what is it like now Phoebe is in your life?

Kaz: At some point I realised that Phoebe wasn’t just some quirky character that I had created, she was actually me. My true self that had been hidden away for so many years. The more I have come to embrace this, the more I have healed. Phoebe somehow unraveled the spaghetti inside my head, cleared the fog and let the light back in. I could finally see and feel again and have started listening to my heart. I am my true self now.

I am an artist. I am free. I am who I am, authentically…

I am Phoebe. Sometimes I think she has completely taken over my brain. She’s the driver, which isn’t a bad thing, because now I see things completely different to how I did only a few years ago. Now I LOVE every minute of my life. Happiness, love and excitement have replaced the deep depression and anxiety that used to stifle me before. I AM JUST SO HAPPY I WANT TO SHOUT IT TO THE UNIVERSE ! ! !

Don’t worry, there will definitely be a ‘Phoebe’ for this little outburst in my next book! I guess the only difference between Phoebe and I, is that I actually wear clothes? But I am naked in other ways… I don’t care as much anymore about what other people think. My kids have got to see a whole new mum, that they have never seen before and it makes them laugh. We have so much more fun together now. 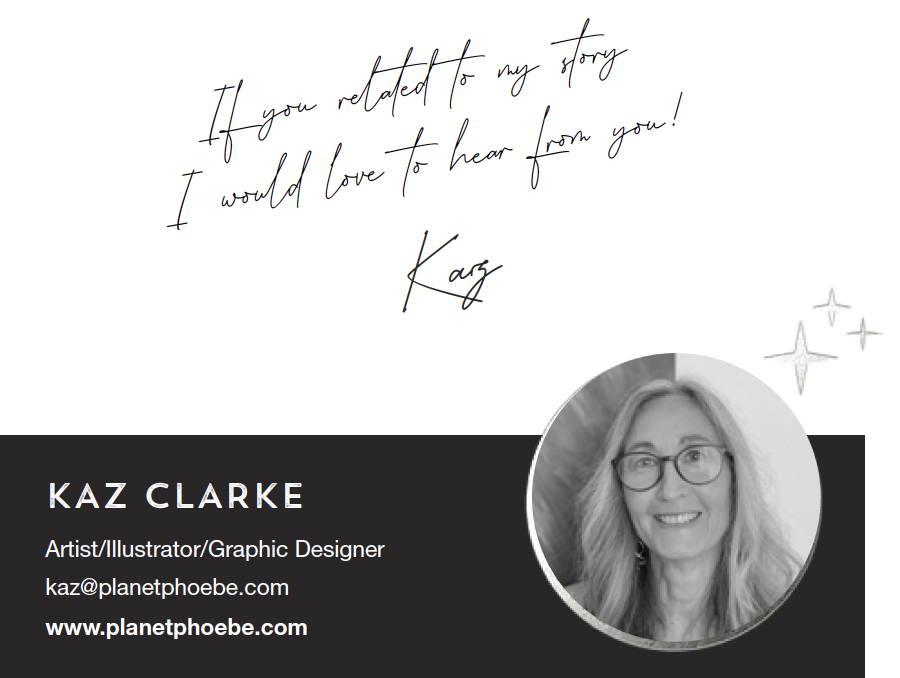 What is depression and how can we work with energy to transform it? Depression is one of our seven core emotions (1.fear, 2. anger, 3. judgment, 4. deprivation, 5. jealousy, 6. hatred and 7. depression) that we move through when we drop into shadow. In practical terms, it means that our consciousness spends most of its time reliving past experiences in the ‘now’. Anxiety is the opposite; it is our consciousness spending most of its time living imaginary moments from future events, that have not yet happened in the ‘now’ moment.

As our consciousness is not able to tell the difference

between real & imaginary images, our body reacts as if the events from the past (depression) or the imaginary events from the future (anxiety), are happening in real time, placing our nervous system in the ‘on’ position 24/7. Our body then creates the ‘stress hormone’ cortisol increasing your blood pressure and your heart rate. This in turn impacts your energy system (or your four lower bodies, physical body, emotional body, mental body and spiritual body) in a less than optimal way.

It can bring on a feeling of hopelessness and we constantly relive the painful emotions of the experience but as we are not in the ‘now’, we are unable to make any changes, unable to take action to move forward in life.

If you or your loved one has experienced depression, I invite you to head over to our FREE betrayal energy process and experience the power of energy medicine.

Energy Medicine has the power to transform all areas of your life! It is the new healing paradigm.

Don’t have your copy yet? No problem we’ve got you covered!
Click Here to order today ONLY $37 including postage
BONUS receive a FREE  6 week Energy Training to support with your transformational journey.